Home > About Us > History

Indonesia’s geothermal energy potential is tremendous, scattered in 342 locations with a potential power source of 11.1 GW, with a large reserve of 17.4 GWe (Geological Agency, February 2018).  This year Indonesia is projected to be the second-largest country in the world that has harnessed geothermal energy. Total current installed power plant capacity is 1948.5 MW.  With the plan to increase geothermal energy utilization, to be 7.241 MW by 2025, Indonesia has the potential to become the world’s first largest country that utilizes geothermal energy. To achieve the target, exploration, and exploitation activities (development) in Indonesia increased. The 38 Geothermal Working Areas that already have Geothermal Operating Permit, of which 11 working areas are currently under development (exploitation) and 23 areas are being explored.

In 1996, a plan was made at ITB to integrate geothermal courses in one program of study by establishing a Master’s Degree Program in Geothermal Technology. The plan, however, was canceled, as in 1997 all geothermal projects in Indonesia were shelved by the Indonesian government due to the financial crisis. Nevertheless, geothermal courses continued at those four programs of study, with one or two courses for undergraduate and two to five courses for graduate programs. Having solved most of the problems caused by the cancellation of geothermal projects in 1997, the Indonesian government issued the Blueprint for Geothermal Development in 2004. To support this plan, in May 2005 a team was formed by the Dean of the Faculty of Science and Mineral Technology at ITB to prepare a proposal for the establishment of Master’s Degree Program in Geothermal Engineering. Two years later this proposal was approved and starting in May 2008 (Semester I/2008-2009) ITB has offered a Master, and it will be called ITB Geothermal Master’s Program.  This program is a four semesters program with the objective to provide the students with sufficient understanding on technical and practical aspects of geological, geochemical and geophysical exploration, reservoir engineering, drilling, well testing, production engineering, utilization of geothermal energy, both for power generation and for direct uses, including reservoir management, project management and economics.

In 2008, the establishment of ITB Geothermal master’s program, there was nineteen students enrolled the course and eighteen were accepted (Figure 1). A number have varied since, but in 2013 saw the highest number of students, with 66 enrolled and 49 accepted. This is due to cooperation in the field of geothermal education between ITB-UoA-PERTAMINA. The program is a joint program, namely a master’s education program and a certificate in the geothermal field held for 20 employees of PT Pertamina Geothermal Energy (PT PGE). This program is named “A Joint Program leading to the award of UoA Post Graduate Certificate in Geothermal Energy Technology and ITB Master’s Degree in Geothermal Engineering”. The course was held in Jakarta with the faculty of the University of Auckland. Considering that some participants did not have an educational background in Geology / Geophysics / Geochemistry, the participants were also given a bridging course in the field of geology for 2 (two) months with instructors from ITB.

ITB Geothermal Master’s Program has always male-dominated with an average of 20%  females from 2008 to 2017 (Saptadji, 2018). Figure 2 shows that the highest proportion of women was in 2016 when there were ten females out of a total of twenty-six students (38%). Waiting time for join hire in this program shows in Figure 3. It shows that nearly 70% of graduates waiting for job hire around 0-3 months. The occupation for graduates of Geothermal Master’s Program is dominated by geothermal developers, private sectors, and government, each at 36%, 24%, and 10%, respectively (Figure 4). 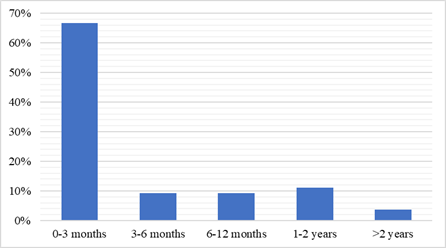 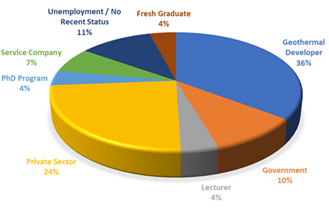